A Train Ride to the Meaning of Life

A Train Ride to the Meaning of Life

My most memorable and cherished teacher was a yogi named Acharya Upendra Roy, who immigrated to Australia from India in the late ‘60s. He was a bona-fide yogi, honored with the title “Acharya”—which means “teacher” in Sanskrit—by a traditional lineage of Yogis in India, passed down for thousands of years. Yoga and meditation weren’t just teachings or work for Acharya, they were a way of life. When you were around him, you could not only see it but feel it.

I had the good fortune to be around him a lot in my life. I was blessed to have been taught by him one-on-one, as well as in group sessions for the official Acharya’s Yoga and Meditation teacher’s training certification in Australia.

Acharya once told me a story about an overnight train ride in India, where he met an elderly gentleman who he felt to be a kindred spirit. He was excited as he recounted the hours of stimulating philosophical discussions he had with the gentleman during the long journey. At one point in the evening, the man said, thoughtfully, “So now I’m going to ask you, a real-life Yogi, the ultimate question so many of us want to know.” He paused to take a sip of his chai with a focused contemplation before continuing. “What is the meaning of life?”

Acharya remembered how the question just hung there in profound silence. It was as if the humid evening air within the carriage was also processing this question. “I don’t need the answer now,” the man explained. “But please, if you could answer it before we part,” he pleaded.

For the rest of the train ride, Acharya pondered and meditated on the question. He was not one to give superficial, trite or generic answers, and he certainly wasn’t going to do that for this important inquiry.

It wasn’t until the final moment of their journey, Acharya recalled, as he stood by the carriage door preparing to depart, that he offered his answer. I imagined Acharya looking warmly into his new friend’s eyes. He was fiercely soothing, like the light that follows sunrise, unapologetically aware of its power and illuminating grace, and yet profoundly humble because he has nothing to prove.
“The meaning of life,” he said, simply, “is… breathing in and breathing out.” And he walked off the train.

When I first heard this answer, I must admit to feeling underwhelmed. As a seeker of truth and explorer of happiness and self-improvement, this was a lifelong question that I had pondered since I was nine years old. Surely, I thought, the answer must be more than that? I was expecting to be awed by some mesmerizing prose that would take my breath away, a wondrous echo of the captivating words of Rumi or Kahlil Gibran.

But after reflecting upon the profundity of this answer, I realized that its very simplicity was the point. And, in a beautifully uncomplicated way, the meaning of life.

We complicate our lives with so many thoughts, concepts, philosophies, goals, beliefs and life situations—often making things a lot harder than they need to be. But when all is said and done, life is what unfolds as we breathe in and breathe out.

Everything else is a bonus.

If we remember this, allowing ourselves to be content in the moment—with the moment—we can bring purpose to life just from Being. Life is meaningful, then, just because we are …

Breathing in and breathing out. 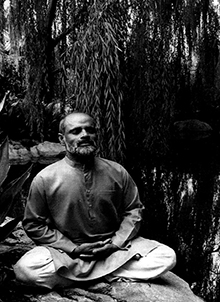